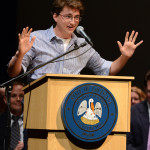 “You always hear that the real world awaits when you get out of school,” Academy Award-nominated director Behn Zeitlin opened in his remarks at this year’s Celebration ceremony for 2013 NOCCA graduates.  The 30-year-old filmmaker (Beasts of the Southern Wild), composer and animator, offered students succinct advice:  “So many people want to be artists, so work hard.  Be nice to your parents – you may have to crash on their couch. Don’t be afraid to not have money if you are following your dreams.  And these years at NOCCA: these were the real world.”

NBC News brought Education Nation On-The-Road to New Orleans in April, partnering with its local affiliate WDSU to ignite further dialogue on improving student outcomes in Louisiana and the nation. NOCCA was honored to be the host for the three day event. 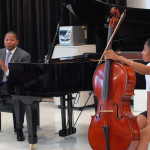 Classical Instrumental Level IV student, Angelique Montes, was selected to the National Youth Orchestra of the United States of America by Carnegie Hall and the Weill Music Institute.  Following a residency at Purchase College, the 120-member orchestra embarked on a cultural exchange and tour to Washington, D.C., London, St. Petersburg and Moscow, in performance  with maestro Valery Gergiev and violin soloist Joshua Bell. 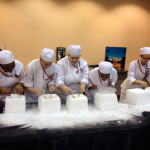 Also during the Superbowl, the NFL Players Association with the Professional Athletes Foundation (PAF) contributed a donation to NOCCA in the name of alumnus Terence Blanchard and his wife Robin Burgess (at top, with the NFLPLA’s Andre Collins, NOCCA President and CEO Kyle Wedberg and Jazz Chair Michael Pellera). 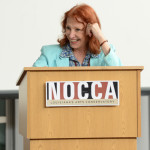 Long-time Drama faculty member and award-winning actress Janet Shea retired from NOCCA after nearly two decades of training young actors.  Luckily for us, she returns in the fall to direct  Tartuffe .